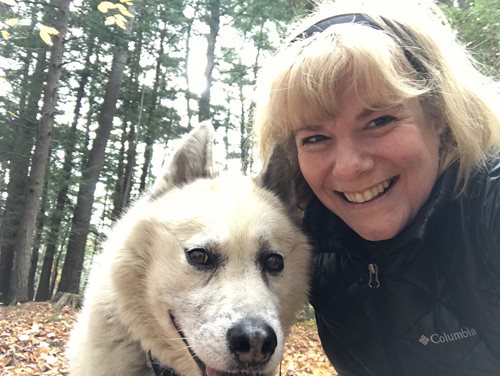 From the folks at Northern Light Health, we find the story of Jasper and the “This Is Good” (TIG) moment.

“Sometimes the good stuff is right there in front of you and sometimes you need a shovel to dig for it, but calling it out makes it real and gives it power,” says Pam from Palm (as in Palm Street), ever at-the-ready to chase the good stuff down. Like Jasper.

Jasper is a jail-break kind of dog that slips his leash or digs his way to freedom, however the opportunity may present itself. But Pam is an “I’m-on-it” sort of woman who drops her bike on the sidewalk to chase down neighborhood dogs on the run no matter how many backyards they lead her through. She sees a situation; she goes for it. In fact, Jasper’s owner didn’t even know she was missing a dog until Pam showed up at the door with the Husky/Shephard rascal by the collar.

“Hi, I’m Pam from Palm,” Pam announced when Anita Crane, a Northern Light graphics designer opened the door. “I was told this runner is yours?” Anita looked down at her panting and quite happy dog.

After Jasper trotted through the door, Pam-from-Palm and Anita got to talking which is how Anita found out about TIG. It stands for “This Is Good.” If Pam gets her way, TIG is what we’ll all be calling out when we come across something good. For instance, say someone shows up at your door with your escaped dog. That’s a TIG moment. Or say you happen to see a newborn baby do some of those newborn baby moves. That’s a big TIG.

A TIG can be anything. It can be as tiny as a Tic Tac you didn’t know you were going to be offered or it can be as big as a vaccine for COVID. The point is to call it out when you see something good going on in your world. Especially now.

The whole TIG thing came about when one of Pam’s friends randomly commented, “This is good.” Something about the moment made them realize there was concept potential here. It could be big. They could see it. In that moment TIG was born and now they are trying to get it going.

“We’re trying to make this into a movement so pass it on,” Pam told Anita, as if Pam-from-Palm wasn’t adorable enough with her spontaneous, self-appointed dog-catching. (Talk about a TIG.)

So call it out and pass it on! We’ve got a movement here to spread so make it your family’s thing! Wouldn’t that be so TIG?

Read the full story at northernlighthealth.org.